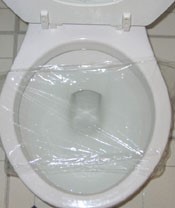 When you place clear plastic wrap over a toilet, the next person to use the restroom probably won’t not see the opaque obstruction waiting to block their excrement from hitting its intended mark. This joke can be pretty filthy. That must be why my grandmother introduced the gag to me when I was all of 14 years old; again, playing pranks runs in the family. My uncle and his new bride were on their honeymoon and my grandmother had a key to their house. We set pranks up all over their house so they would have one hell of a homecoming once their vacation was over. I recently asked my aunt about the prank and she said, “Yes, it did work and you wouldn’t have wanted to see it.”

The only other way that I have used clear plastic wrap was as a young hell raiser, before I had my driver’s license. A group of us had spent the night at a friend’s house that lived out in the sticks. The country roads near his home were seldom traveled late at night. This allowed us time, between cars passing, to set up our prank. We stretched a single layer of plastic wrap across two trees that were on opposite sides of the road. At night, when suspended about 3 ½ feet off the ground, the plastic acts as a mirror and reflects an oncoming vehicles headlights giving of a visual effect that makes it look like another car is coming straight at you. From our hiding spot, we heard the car honking as it approached the impending thin barrier. The driver came to a stop in front of the plastic wrap and with aggravation and a few curse words, tore it down in one fell swoop.